One of my works: ENAK, which I have finished written in 2011 has never seen any publication in Indonesia. Six years ago it did win a publisher attention, the editing is done and the cover is made, a year went bye and they cancelled the publication. Couple years after that another publisher was interested too. The editing is done, the cover is made. Again, the publisher just vanished and my work did not see any light.

In 2016 it finally got translated into Malay and first published in Malaysia. And this year, 2019, it will be published in Singapore and UK in English. For a work which has not been published in its origin, I think this is wonderful. I was lucky, and blessed.

However, I think is not fair if it's not published in its original language. And so, last year I gave it a try again, the answer was no, no and no.

Just a month ago, I decided to do publish it by myself. I always have this imaginarium publisher company which I called Peculiar Books. So, that's a start.

The thing about self publishing is that it consumes a lot of time and energy. I spent almost two months just to finish editing, proofreading, layouting with InDesign (which I learned from Youtube and Google, and asked someone too) also designing the cover. Not to mention the redrafting the work because it's something that I wrote 7 years ago, so I need to update the writing to my current one (not exact, but nearly <== the prove that my writing is actually evolved, hopefully to something better, lah).
The most wonderful thing about self publishing is that I got to decide the dimension of the novel, and what kind of font that I like to use. I just realized that it is all art. The art of publishing. And I kind of liking it.

Now the draft and everything else is completed, I have sent it out to an affordable printing company which also will take care of the ISBN. And for the starter I only order for 50 copies, probably will sell it through Facebook and other social medias.

ENAK was previously published under ENAK (Buku Fixi, Malaysia 2016) and soon in English under Love, Lies and Indomee (Epigram, SG and UK, 2019).

It is a story about cynic curvy girl that thinks she's stupid and very unlucky in life and love, up until these two guys appear in her life. The tragicomedy will bring you to understand how does it feel to be her, a strong Jakarta girl. And to be a secretary for police attaché in a Korean Embassy.

Here is the cover that I designed: 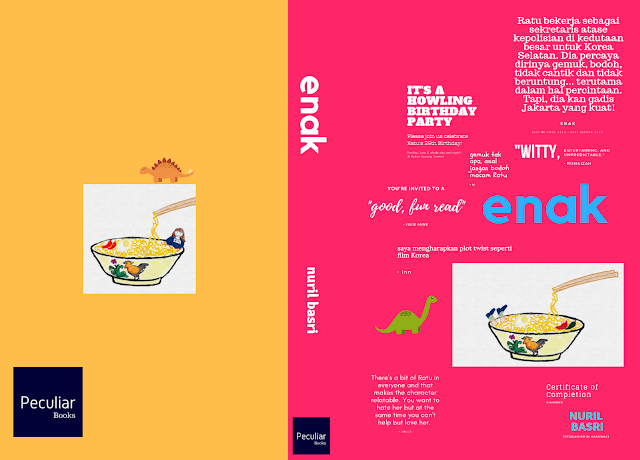