10 years of Not A Virgin

Ten years ago this month Not A Virgin was published for the first time under the title DOSA, its Malaysian translation by Buku Fixi during the Kuala Lumpur International Book Fair 2012. I was never in the country before so Amir Muhammad, the publisher invited me to come. Couple years later, he brought the draft and handed it to John H. McGlynn who then translated it into English, I was a cashier in a minimarket. The Lontar Foundation published its English edition in 2017, making me the youngest writer to be translated and published by the foundation then. The rare Indonesian version was sold by Peculiar Books, a project I had with the late Wikan Satriati in 2016-ish. And then finally Monsoon Books took it and in 2019 the book was distributed in the U.K., Europe and SEA. Before it saw the light, the draft was very familiar with rejections from the national publishers. None of them was interested.
So, here's to ten years of it, and I hope it will still find readers and win me some more meaningful friendships. Like they say, a book is always a magical gate to transport you somewhere.
Literally speaking, the novel has given me the chance to visit ground I had never been to, from Kuala Lumpur, to London, to Frankfurt, and some more.
So I am sending my gratitude to them who believe in the novel and the story. Chin-chin! 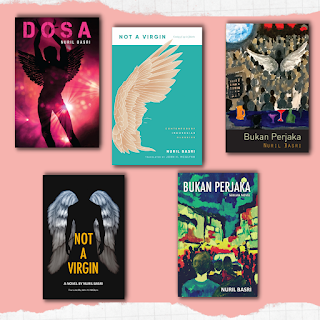