I decided to go back to kampung to see my mum on a simple mission: to calm my titties. The journey to go there was long, dry, and arid. Each time I looked out from the window of the angkot I was in, I felt like I was looking into a post-apocalyptic area. There were no hopes written on the faces of the residents. Feel familiar.

"You are so skinny," said mum. She's not questioning, just declaring. I didn't look at her, just sat at the couch uncomfortably but trying to be confident.

"I gave up junk food and things like that," I answered.

"I thought that's all you want?" she asked.

Indeed. Back in the early year of my life, I told her if I had money, I would buy any snacks and flavored drinks that I want. I won't hold back. That's how it feels like to be coming from a very poor family, your wants are simple.

"I started growing large tummy because of those," I said.

"That's because you're not working out," she said.

"It's because of corona I couldn't go anywhere," I said.

"It happens to everyone. Everyone has that belly," she said again. She was sick for a year already. So weak.

So I went to the bathroom to check the toothpaste, soap, shampoo and detergent, things like that. All ran out. She doesn’t have anything in the drawer of the kitchen cabinet as well. No Indomie.

"I've cooked soup if you want to eat," she shouted.

We then dined out somewhere because I thought it's going to cheer her up. All my life I've been cheering her (and anyone else in the family) up. I'm quite used to it.

This plan of seeking refuge in her comfort became nonsense. I could feel that it would be terrifying for mum to find out how broken or unstable I was at that time. I am supposed to be the strongest and very least problematic in the family.

The truth is I was having a major withdrawal after finishing the last writing project. It was the only thing that kept me going on with life. I woke up at two a.m. and finished by 3 p.m. every day for six months. Yeah, it was frustrating. But being frustrated for a cause is something that I secretly like. When the thing finished, I said I'm going to take a break for a while to see if I can do a thing other than writing. Just to recalibrate everything. Anyhow, after several days of idling, I suddenly became a complete nutcase. My mind is unoccupied. No bar to hold on to and I started being very insecure.  Irrationally, I was attacking the person that I care about the most because he was the closest. I feel very sorry for him.

I wouldn’t be able to tell my mum all of that, so I just pretended I was content and my life was steady. After groceries and things tomorrow, I'll be going back to my rent room to see if I can go through the rest of the day. Probably I'll be fine. I should take care of my own titties. 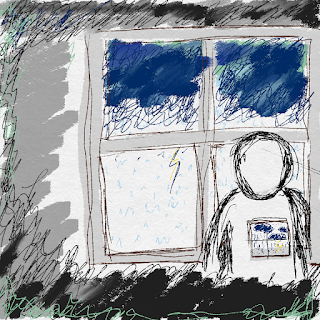