I'm back at my rent room today. It's very bleary outside. Tiny water droplets pouring like never-ending memory. It reminds me a lot of Corvallis, Oregon. I'm now having my coffee although it is almost lunchtime as I write this for you.

I took my mum to the hospital yesterday. It's her monthly check-up since she's sick. We had to wait for more than five hours until we finally meet the doctor. Some say that because we're using free service, (you know that kind of insurance provided by the government which we pay a small amount monthly), that makes us served last. If we are premium, then they'll probably put us first. The system is so fucked up but there's nothing much we could do. I was really thinking of burning the hospital but I was not that upset. Anyway, she got her medicine and will have another blood test next month. Boy, she hates blood test.

After I sent her home, I went straight to the mall near my rent. My only friend has already waited there, sipping extra expensive bubble tea. I mocked him about that right away.

"The fuck you took so long, what's with the hospital?" he asked.

"Yo, the pharmacy so packed. All poor people are sick."

He's the only friend in the city that I still see from time to time. Say, once in a month. Probably twice when he had holidays. I met him ten years ago when I was an operator in an internet café. He was a patron. We don’t really have anything in common but just stuck with each other. We probably share some fondness for talking about boys and people in general.

"My mum packed me some lunch and dinner so I don’t have to buy. I'll eat it in the food court."

He ended watching me eating a salted egg and fried kampung chicken.

"You going to buy that discounted clothes or not?" he asked.

"You said you wanted to go here to buy some stuff..." he clearly disappointed, he was expecting to try some new clothes as well. But to go to the expensive outlet without ending in buying anything probably is too embarrassing for both of us.

"You would never have imagined how much I have spent for the last three days," I said.

He didn’t say anything afterward.

I finished my meal.

"Join me to the bookstore," I said as I bagged my trash.

"What you wanna buy?"

"Some acrylic paints," I answered shortly.

"You can't buy clothes but you want to buy paints... wasting money," he said following me.

"I need to do something creative…"

We went into the store and actively browsing the cheapest paint. No matter what the quality as long as they can color. My friend never bothers with what I'm doing, he was busy taking notes on who's hot in there.

After paying for the paint, he started telling me about dates and hookups he had recently. He had a lot. He would also be showing me the pictures to parade his accomplishment. Sometimes I'd be jealous, but mostly I'm just excited to hear about it.

We ended up going back to the food court and playing the mobile games up until the mall is about to close. We had some talk in between, but mostly just play the game.

I have started an affinity for vodka. I bought a small bottle for new year's eve a few days back to make fun of myself. I finished the bottle that night with some sort of indifferent feeling. Vodka is not that bad, but certainly not that good either, at least for me. The good vodka doesn’t have a chemical smell to it, it should be just like water. Vodka could be derived from potato, but the one I had was from rice. Well, I thought perhaps this is actually the same as my meal. I like that a warm burning sensation in my throat as I poured it in my mouth.

I was drunk that night. I sent three guys and one girl a picture of me posing an attempt at a sexy girl. You wouldn't believe how humiliating for me when I found out that shit afterward. The funny thing is the response I got from the boys is quite nice, one told me that I was coy and demure in the pic, one told me that he'd fuck me and the other was indifferent, said nothing. While the girl said she was disgusted by it, probably she's a queerphobic. *let me know if you want to see the pic, I'll send you one when I'm drunk*.

As I stepped into the new year and having to face myself again I feel like I need to find myself a distraction just for the sake of it. In between playing the game, my friend told me he's became addicted to poppers. That's a thing in a small bottle that you inhale before you have sex. I don’t know what it contains, probably some drug. He said he keeps buying it and couldn’t enjoy sex anymore without it. I told him I was concerned but he seemed like he enjoys what he's doing and he knows the consequence, so I backed off.

I told myself, uh this year I'm going to start my addiction to something, perhaps to liquor or spirit, whatever you may call it, so I have something cool to say, just like he does.

Therefore I swayed to the liquor store yesterday and bought another bottle of vodka (I was surprised by how not that expensive it is, the same price as the paint or two cups of boba tea).

I will have excuses and that would sound very destructive of me. Even when I said it, I sound like a Russian already. "I met my friend last night. His name is Abdel Vodka." I probably would borrow some money for vodka. And you guys should say no. 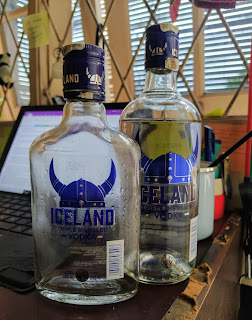